Abel Pacheco, Government and Community Relations Manager for the Central Corridor at Sound Transit, joined us to talk about how the regional transit agency is navigating the pandemic.

Abel also gave us a rundown of Sound Transit’s financial position. With the agency’s budget being made up of 66% tax revenues, the recession brought on by the Covid crisis has hit Sound Transit especially hard. Over the next year or so, Sound Transit’s board will be engaged in a process of realignment, whereby they identify near-term priorities, re-evaluate projects and manage affordability. The board will use the following criteria to inform realignment: 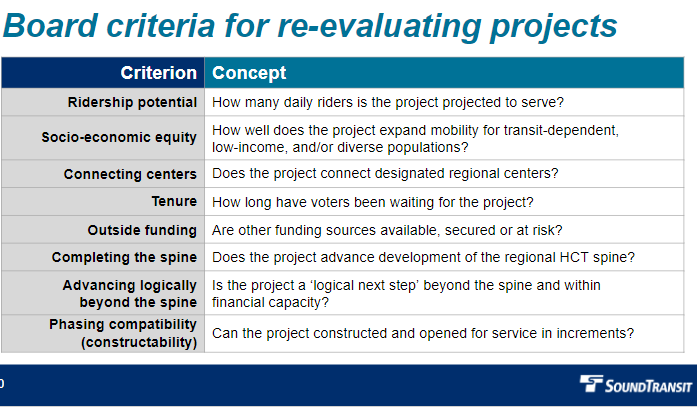 One goal of realignment is to make sure there are shovel-ready projects eligible for federal funds, should they become available — meaning projects that are delayed have the potential to get back on track if the state and local entities receive stimulus or other federal funding.

Abel also covered some of Sound Transit’s equity initiatives, including review of fare enforcement policies, and how they disproportionately affect youth, people of color, and other marginalized groups. As well as how Sound Transit partners with cities to return land to communities once transportation construction is completed.

The big question that closed the session was about the West Seattle Bridge — is there hope for a solution that replaces the high bridge in combination with the bridge for the West Seattle expansion of Link light rail? Abel shared that, at this point, the two processes remain separate from each other; however, both the City of Seattle and Sound Transit are open to the possibility of a joint bridge. Time and budgets will tell.

Call to action: If you’re interested in participating, Sound Transit has a Citizen Oversight Panel that independently monitors Sound Transit to make sure it meets its commitment to voters.