The presidential election has dominated the news cycle. We expect that most people are planning to vote for the next president — King County is projecting 90% voter turnout. We also know that, oftentimes, voters’ biggest impact is on local issues. This guide is intended to help explain some of the local issues you’ll encounter on your general election ballot — issues with the potential for more immediate effect on our region. We will not endorse candidates, or even suggest how you should vote on ballot measures. Our goal is to help explain key aspects of your King County ballot in plain language so you can use your time making your decisions instead of deciphering your ballot.

We’ve listed the amendments out of numerical order so as to group the four amendments related to law enforcement. All amendments need a simple majority to pass.

Your ballot will include the opportunity to vote for:

In this guide we’re focusing on King County’s seven Charter amendments and one ballot measure, as well as the City of Seattle’s Proposition 1.

A couple of helpful definitions before we get into the amendments and measures:

Charter Amendment No. 2 — Disposition of Real Property for Affordable Housing

Currently county-owned property must be sold at fair-market value, regardless of its intended use.

This amendment removes Charter restrictions that prohibit the sale of county-owned property below fair market value, if the property will be used for affordable housing purposes.

If it passes, this amendment will make county-owned property more accessible to affordable housing developers.

Charter Amendment No. 3 — References to Citizens

This amendment updates the Charter to change references to “citizen” to “resident,” “public” or “member of the public” depending on appropriate grammar.

If it passes, this change would clarify several references in the Charter to the concept of citizenship being necessary to access certain aspects of county government. One example is the ability for any member of the public to submit complaints concerning the operation of county government — having U.S. citizenship immigration status is not required to submit these types of complaints.

Charter Amendment No. 7 — Prohibiting Discrimination on the Basis of Family Caregiver, Military or Veteran Status

Currently, King County does not legally protect people with family caregiver status, military status, or status as a veteran who was honorably discharged or discharged solely as a result of sexual orientation or gender identity from employment and contracting discrimination.

This amendment prohibits discrimination in county employment and contracting based on the above statuses.

If it passes, this change would expand protected classes from county employment and contracting discrimination.

Currently, inquests are not required for all deaths that happen in the county’s jails. In the event an inquest is conducted, the family of the deceased is not provided with legal representation, though they are able to hire private legal counsel.

This amendment specifies that inquests should be performed for all deaths in the county’s jails and provide families of the deceased with legal representation during the inquest process. The inquest process is a legal inquiry to determine the facts relating to any death that occurs in a county jail. It involves introduction of evidence and questioning of witnesses, including law enforcement personnel and experts.

If it passes, this amendment will increase oversight of deaths that occur in the county’s jails and allow all families to fully and equitably participate in the inquest process regardless of financial means.

Currently, the Office of Law Enforcement Oversight (OLEO) does not have subpoena power. OLEO represents the interests of the public in its efforts to hold the King County Sheriff’s Office accountable for providing fair and just police services. OLEO conducts audits, reviews, investigations and policy work, informed by community engagement and stakeholder partnerships.

This amendment authorizes OLEO to subpoena witnesses, documents and other evidence relating to its investigations. Additionally, any subpoenaed witness shall have the right to be represented by an attorney.

If it passes, this change will enhance OLEO’s investigation methods.

Currently, the King County Sheriff is an elected, non-partisan position with a four-year term and no term limit.

This amendment would make the King County Sheriff an appointed position.

If it passes, the Sheriff’s appointment would require community stakeholder input and be subject to Council confirmation.

Charter Amendment No. 6 — Structure and Duties of the Department of Public Safety

Currently, the King County Sheriff is an elected, non-partisan position whose duties are specified by general law.

This amendment would allow the Council to set the duties of the Sheriff, regardless of the approval or rejection of Amendment 5.

If it passes, this change would make the Sheriff’s Office operate more like other executive departments where the County Executive and Council issue policy directives and ultimately determine the law and enforcement policies.

If approved, amendments one, four, five and six would have the following impact on the current King County organizational chart: 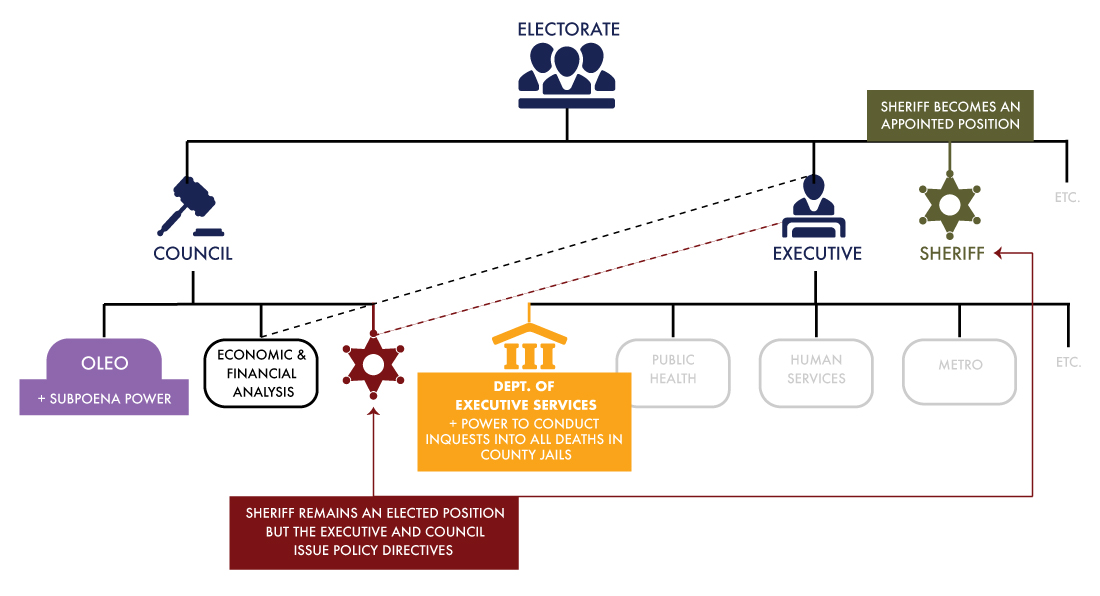 Currently, Harborview Medical Center often operates at 100 percent capacity, and critical surge capacity and emergency department capacity are limited. The last general obligation bonds to fund seismic and public health and safety improvements were issued nearly 20 years ago, since then King County’s population has grown by 30%. The hospital is maintained as a public hospital by King County to improve the health and well-being of the entire community and to provide quality healthcare to the most vulnerable. It is operated by the University of Washington as the only Level 1 Trauma Center for adults and children serving a four-state region that includes Alaska, Idaho, Montana and Washington.

If it passes, the proposition would authorize a new property-tax increase averaging 8 cents per $1,000 of assessed home value over up to 20 years (which equates to an average tax increase of $75 a year for the median homeowner). This bond would give the hospital the capacity to surge in case of an emergency. The bond would also allow Harborview to make needed updates to infection control standards, ensure the primary tower is seismically safe, and update the emergency room.

Proposition No. 1 Seattle — Funding for Transit and Related Transportation Needs

This proposition would replace the existing sales tax and car tab fee with a six-year, 0.15% sales tax measure. The car tab fee was not eligible for renewal due to the passage of Initiative 976, which is currently awaiting a ruling from the State Supreme Court.

If it passes, this proposition would allow the City of Seattle to continue to buy supplemental transit service from King County Metro.  It would also allocate some funding for emergent service needs such as West Seattle transit while the West Seattle Bridge is closed, transportation needs related to COVID-19 recovery, street maintenance, and transit access for low-income residents, essential workers, seniors, and youth.